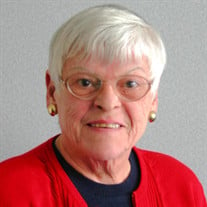 Beverly Ann Ovist (nee Patterson), 92, a resident of the Health Care Center at BayWoods of Annapolis and former long-time resident of Chester County, PA died at home on Thursday, October 7. Interment of cremains will be at Church Hill Cemetery, MD, arranged by Fellows, Helfenbein, and Newnam of Centreville, MD. Bev was born in Wyalusing, PA on July 18, 1929. She is predeceased by her mother, Margaret Vanessa Haischer (nee Irvin), her father James Vernon Patterson, her step-father Earl F. Haischer, and her elder brother Philip Atwater Patterson. After difficult early years, when economic hardship forced her mother to place Bev and her brother in foster care, Bev came to know Corning, NY as her hometown, where the re-united family thrived as the Haischer household. Bev earned a New York State Regents Diploma and was a member of the Corning Free Academy’s graduating class of 1947. At a time when higher education for women was still a luxury, Bev secured admission to Ottawa University on a work-study basis and headed for Ottawa, KS. From there, she transferred to Kansas State University, earning both a BS (1952) and an MS (1955) in History. Her master’s thesis, “Kansas and the Presidential Election of 1936,” can be accessed at: https://archive.org/details/kansaspresidenti00ovis/mode/2up. While at KSU, Bev met chemistry PhD candidate, Elwin B. W. Ovist of Weiser, ID, whom she married in June of 1954. On completing his doctorate, El accepted a research job with Sinclair Oil (later Arco), and the couple moved to the new planned community at Park Forest, IL south of Chicago. In nearby Harvey, Bev taught American History and English at Thornton Township High School for five years until becoming a full-time mother and home manager in 1960. Husband El became part of the post-war “organization man” phenomenon, and Bev thoroughly enjoyed the early-career mobility this entailed. Between 1964 and 1974, the couple and their two daughters moved five times, living at locations on both US continental coasts, as well as on the “third coast” of Lake Michigan. After a final transfer with Arco in 1974, the family remained in the Philadelphia suburb of Radnor, PA until 1984. Bev always put family first, but also continued to work as a substitute teacher while her children were young. Then in 1977 she entered the world of office work and enjoyed ten years of full-time employment with York/Borg-Warner Heating and Air Conditioning in King of Prussia, PA. Only four years after a much anticipated move to the golf course community of Hershey’s Mill in West Chester, PA, Bev suffered the tragedy of early widowhood: she lost the love of her life and best friend of 34 years when El died of lung cancer in 1988. To keep herself active, she put to use what she had learned during El’s illness and became a volunteer at Paoli Memorial Hospital in Paoli, PA, teaching others how to understand and submit their medical insurance claims. She also served as president of her local homeowners’ association and fed her life-long interest in politics by becoming an election judge. In 2003 Bev was among the first to move into the retirement community at BayWoods of Annapolis where she made many new friends and avidly embraced committee work and adult learning. Even after a series of strokes forced her to move into the Heath Care Center at BayWoods, Bev never lost interest in getting to know new people, analyzing different points of view, and sharing the insights that come with thoughtful conversation. Bev possessed uncommon determination and readiness to meet challenges. She welcomed change as the potential for new learning and never let fear of the unknown dissuade her from her goals. With her beloved husband, she shared complete and equal companionship of mind and body; to her children, she gifted the inexhaustible resources of a happy childhood, love of learning, and scope for dreams. Second only to the wellbeing of her family, she valued education, freedom of thought, and the founding ideals of America as the great experiment in democracy. She leaves the legacy of her inspiring example and these key values to her survivors, her daughters Margaret O. Woodside and Krista O. Scott, their husbands Samuel T. Woodside and Michael W. Scott, her cousin Judith I. Hymes, her sister-in-law Carol B. Patterson, her niece Allison P. Cullen and her husband Michael G. Cullen, and her nephews Gregory, Michael, and David Ackerman. In lieu of flowers, please consider supporting Kansas State University at: https://giving.ksufoundation.org/campaigns/17349/donations/new. The family will have a graveside service in Church Hill, MD on Tuesday, October 12, followed by a private Celebration of Life.

Beverly Ann Ovist (nee Patterson), 92, a resident of the Health Care Center at BayWoods of Annapolis and former long-time resident of Chester County, PA died at home on Thursday, October 7. Interment of cremains will be at Church Hill Cemetery,... View Obituary & Service Information

The family of Beverly Ann Ovist created this Life Tributes page to make it easy to share your memories.

Beverly Ann Ovist (nee Patterson), 92, a resident of the Health...

Send flowers to the Ovist family.