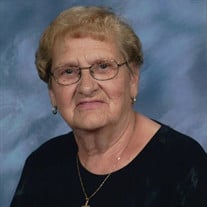 Beverly “Bebe” Collyer Ashley, age 90, passed away on Monday, January 17, 2022 at Chester River Manor. She was born in Rock Hall, MD to Melvin “Trigger” and Gladys (Coppage) Collyer and was the only daughter of four children. Bebe graduated from Rock Hall High School in 1948 and attended Eaton & Burnett Business College in Baltimore, MD. On February 28, 1953, she married Charles Joseph Ashley, Sr. They made their home at the family homestead on Long Cove in Piney Neck where they raised four children. Bebe worked locally at Garity Drugstore, Baltimore Business Forms, LaMotte Company where she was known as one of the Golden Girls, and Helping Hands where she served in the job she loved the most as a compassionate caregiver to many, until a fall and injury in 2014 prevented her from continuing and forced her into retirement. Bebe was vibrant, spunky, generous (to a fault, if there is such a thing), caring, kind and let us not forget strong-willed. She would share her opinion whether you wanted it or not (a true Collyer trait); you never had to guess where you stood with her. She was the ultimate devoted and doting wife, mother & grandparent, and an exceptional relative, neighbor and friend. She was extremely social and could strike up a conversation with anyone anywhere; she had the gift of gab, another Collyer trait. (Her late husband claimed she could talk to a post and get it to talk back.) She had a keen wit and a zest for life and laughter; in her earlier years, she and her best friend, Rose Beck, were dubbed “Lucy & Ethel.” Bebe loved to decorate (in excess) for the holidays and was a phenomenal cook (especially known for her hand-picked crabmeat & outrageous crabcakes and catering for family & friends). She was an active member of Rock Hall United Methodist Church (RHUMC) where she served on various committees & Boards and participated in bible studies, church programs, events and fundraisers for decades. She loved her Savior, her church & charge, church family and the Rock Hall community, where she served as a true fisher of men/women. She was grateful every day to be blessed with a loving family (both nuclear and extended) and countless friends/friendships that she cherished. She was supportive and encouraging and always willing to lend an ear or a hand. She made everything she did look easy. However, she suffered from FOMAD (Fear of Missing A Deal), so resultingly two of her favorite past-times were shopping and “yard-sale-ing” especially with her dear friend, Jean Spence and her cousins, Laura Lee Buckley and Clifford Nelson. Additionally, she loved to marathon watch the Golden Girls on the Hallmark channel, and befittingly the show was actually playing in the background at the very time she passed away, and notably she died on what would have been Betty White’s 100th birthday. So, Bebe-esque! She was preceded in death by her parents, her brothers (Bobby, Billy and Bucky), and her husband who passed away in January 2006. Bebe is survived by her children: Donna Strong (Robert) of Rock Hall, Joanne Carson, Maria Coakley (Mike), Charles Ashley, Jr. (Susan) of Chestertown, and her quasi-daughter, Robin Wood Kurowski (Ed), also of Rock Hall, along with four grandchildren: Jennifer Zsebedics (Greg), Joseph Ashley, Anna Ashley and Dustin Broyles; four great granddaughters: Brittani Fahrman (Michael), Abigail Zsebedics, Ella Zsebedics and Kaylee Broyles (and Cameron Spence whom she loved like her own), and three great-great grandchildren: Sienna, Gemma and Laszlo Fahrman. While there will be a private graveside service for the family, everyone is invited to a Celebration of Life on Saturday, February 19, 2022 at Rock Hall United Methodist Church where relatives and friends may visit from 9:00 a.m. to 11:00 a.m. with the service immediately following at 11:00 a.m. In lieu of flowers, donations may be made to Rock Hall United Methodist Church, PO Box 66, Rock Hall, MD 21661 or online at yourrockhall.church/give.

The family of Beverly Collyer Ashley created this Life Tributes page to make it easy to share your memories.

Send flowers to the Ashley family.