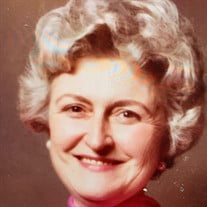 Betty Mae Wagner Bartlett passed away May 19th 2021, just shy of her 93rd birthday in Easton, MD. Betty Mae was born June 11, 1928 in Detroit, Michigan to parents Garfield and Adeline Wagner where she and her seven siblings were raised. Betty Mae was the loving wife of John A Bartlett (Jack) for 61 wonderful years. She was mother to Nancy, Avery and Susan and spent most of her life in Michigan and Florida, while most recently in Maryland to be close to family. Early in their marriage Jack and Betty lived in Chateauroux, France with their young daughter Nancy while Jack served as a Captain in the Dental Corps of the U.S. Air Force. Betty was a graduate of Michigan State University where she was a member of the Alpha Chi Omega sorority. Betty served in many supportive and leadership roles in the AChiO alumni organization throughout her life, both in Michigan and in Florida. She attended many of their national conventions. Betty also served several years as a fundraising volunteer for Goodwill Industries in the Birmingham and Detroit area. She also chaired the annual Goodwill Gala Charity Event and fundraiser in Detroit. Betty presided as president of the Bent Tree Village II homeowner’s association in Sarasota, Florida for several years. She was a member of Church of the Palms in Sarasota where she volunteered as a math tutor for elementary and middle school students. Betty deeply loved her church services, music programs and fellow parishioners. More recently she participated in the Palms’ online services which gave her great joy. Betty was a fiercely loyal Michigan State football and sports fan her entire life. She was an avid reader and tenacious bridge player. For many years she crewed for her husband Jack in sailboat racing, before passing that baton to her children. Later she enjoyed many a round of golf at Lakelands Country Club in Michigan and at Bent Tree in Florida. Betty Mae and Jack enjoyed many many memorable summers with their family and friends at Portage Lake in Michigan at the Bartlett family cottage compound. Betty and Jack’s son Avery relocated to Sarasota with them soon after Jack’s retirement. Avery’s love and devotion to his parents, especially in caring for Betty in her later years was most admired and appreciated by Betty, as she often spoke of his devotion. Betty later moved to assisted living in Easton, with Avery and Nancy and extended family nearby. The absolute love of her life were her children, seven grandchildren and four precious great grandchildren who she was so happy to have often visited her in these last months Betty is survived by her dear brother Glenn, who is 100 years old, and her daughters Nancy (husband Joe) Hollingsworth, Susan (husband John) Noel and son Avery Bartlett; grandchildren Gregory and wife Caitlin Hollingsworth, Grant and wife Katie Hollingsworth, Brooke Hollingsworth and fiancé Luis Beruff, Christopher and wife Claire Noel, Ryan and wife Andrea Noel, and Andrew Noel; great grandchildren Yates Hollingsworth, Cooper Hollingsworth, Jennifer Noel and Conor Noel. She is preceded in death by her husband Jack and grandchild Quinton Noel. Those wishing to pay tribute might consider a financial donation to Goodwill Industries in memory of Betty Mae Bartlett.

Betty Mae Wagner Bartlett passed away May 19th 2021, just shy of her 93rd birthday in Easton, MD. Betty Mae was born June 11, 1928 in Detroit, Michigan to parents Garfield and Adeline Wagner where she and her seven siblings were raised. Betty... View Obituary & Service Information

The family of Betty Mae Wagner Bartlett created this Life Tributes page to make it easy to share your memories.