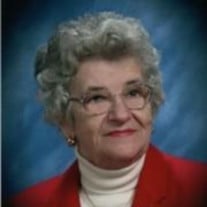 Betty Louise Middleton Clevenger passed away on June 17 at the home of her daughter, Sharon. Betty was 93. Born on October 28, 1927 in Centreville, Maryland, the daughter of the late Miriam Lavina Jones and the late James Bart Middleton. Betty grew up in Centreville, Maryland attending Centreville Elementary and Centreville High School, graduating in June of 1945. Betty married the love of her life, the late Marlin Saddler Clevenger. Marlin and Betty were married July 19, 1947 and had 3 children, as follows: Sharon Louise Cropper, Vicki Lynn Perry and Richard Emory Clevenger (Lynn). Marlin passed away January 12, 2000. Betty and Marlin also had two grandchildren Tiffany Lynn Perry Brown (JB) and Amanda Lynn Clevenger, and two great-grandchildren, Michael Perry and Jamie Brown. Betty worked as a telephone operator for the C&P Telephone Company when she was out of high school and in the beginning of their marriage. She left employment to raise her children and was employed in 1957 at the Grasonville Post Office, becoming Postmaster in 1970. She retired from the U.S. Postal Service in 1980 after 30 years of service. Betty was active in her community holding offices in the Sisters of Knights of Pythias in the Grasonville Temple, as well as Past Grand Chief for the State of Maryland Lodge of the Sisters of the Knights of Pythias. Betty was a Past President of the Ladies Auxiliary of VFW Post 7464, and Past President of the Southern Police Institute Alumni Association. Betty served as Treasurer of the Immanuel United Methodist Church in Grasonville and the Treasurer of VFW Post 7464 in Grasonville, Maryland. Betty is survived by her brothers and sisters: Myrtle Crouse, Blanche Dashiells, George (Toby) Middleton and Richard Middleton. She is preceded in death by two brothers and two sisters: James Middleton, Shirley Sparks, Robert Middleton and Sharon Christine Middleton. Betty’s mother and baby sister, Sharon, were lost in a house fire when Betty was a teenager. As the oldest of nine, she became the go-to person for her siblings, always helping where she could. After retirement she and Marlin danced under the moonlight to the Jack Morgan Orchestra. Due to their friendship with the bandleader, Jack Morgan, and their love for big band music, they were able to travel and cruise to many beautiful locations. She loved her children, grandchildren and great-grandchildren, and was always showing her love and support of them. In lieu of flowers, Betty’s family asks that you POAK (Pass On A Kindness). A funeral service will be held at 3 pm on Wednesday, June 23 at the Fellows, Helfenbein & Newnam Funeral Home, PA in Centreville, MD, where friends and family may visit beginning at 1 pm. Burial will follow at Woodlawn Memorial Park, Easton, MD. For online condolences, please visit www.fhnfuneralhome.com .

Betty Louise Middleton Clevenger passed away on June 17 at the home of her daughter, Sharon. Betty was 93. Born on October 28, 1927 in Centreville, Maryland, the daughter of the late Miriam Lavina Jones and the late James Bart Middleton. Betty... View Obituary & Service Information

The family of Mrs. Betty Louise Clevenger created this Life Tributes page to make it easy to share your memories.

Betty Louise Middleton Clevenger passed away on June 17 at the...

Send flowers to the Clevenger family.