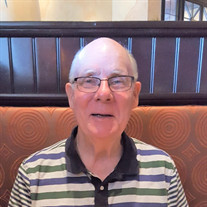 Benjamin passed on November 24 at the age of 84, after a long battle with Parkinson’s and Parkinson’s dementia. He was born in Baltimore City on November 20th, 1937, the son of the late Robert B. Sevier and Bernadette M. Sevier, and brother of the late Albert R. Sevier. He is survived by his wife, Marjorie Gamble Sevier; daughter, Laurie Sevier Via (Dennis); a granddaughter, Carina Via Rhinehart (Tyler); and many nieces, nephews, and cousins. He and Marjorie celebrated 62 years of marriage in September. He graduated from Towson High School in 1956 and soon thereafter, joined the Naval Reserves and subsequently served 2 years of active duty. After discharge, he spent most of his career life in commercial building construction – starting as a carpenter and rising to Superintendent and/or Project Manager. He worked for various commercial contractors and oversaw construction of many large projects, including schools, office buildings, etc. He retired in 2003. He was married to Marjorie Gamble Sevier in 1959. They started their married life in Baltimore County, but eventually moved to Harford County in 1970. He lived in Fallston, Bel Air and Forest Hill until 2012. At that time, he and Marjorie moved to Arizona where his daughter, Laurie and her family lived. He stayed there until October 2020, at which time his son-in-law, Dennis, took a CFO position in Easton on the Eastern Shore and subsequently moved back to Maryland. He was known as “Mr. Fixit” and was always quick to help out relatives, friends and neighbors with their projects. He was also known for his booming voice and hearty laugh – you were always aware of his presence! He loved getting together with family and friends for a fun time, whether it was a party or just playing cards. Ben was also a lover of animals and was never without a household pet. In retirement, he enjoyed golf and skeet shooting in Maryland as well as in Arizona. Benjamin was cremated and will be remembered by a Celebration of Life service on Saturday, January 8th, 2022, at St. Mark’s Church in Fallston, MD. The service begins at 11:30am and will immediately be followed by a reception in the church hall. In lieu of flowers, memorial donations in his name may be made to Compass Regional Hospice, 160 Coursevall Drive, Centreville, MD 21617 or The Michael J. Fox Foundation, PO Box 5014, Hagerstown, MD 21741. A special thank you to Arcadia Assisted Living of Denton II for the loving care they provided since his admittance in April of this year, as well as to Compass Hospice. There are not enough words to express our appreciation and gratitude.

The family of Benjamin Beard Sevier created this Life Tributes page to make it easy to share your memories.