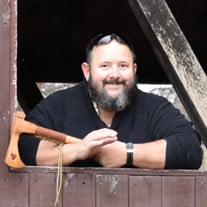 Benjamin Gardner Fountain of Newville, PA was called home to his heavenly father on January 4, 2022. Ben was born on May 10, 1975 to Edward Gardner Fountain of Greensboro, MD and Donna Marie Seward (nee Melvin) of Chestertown, MD. He was raised on the family farm in Greensboro and was part of 4-H and the Boys Scouts of America for many years. A 1993 graduate of North Caroline High School, Ben enlisted in the National Guard during his junior year. He proudly continued his service for 6 years. Ben was sealed for time and eternity through marriage to Michelle Jean Moser on October 14, 2006 in the DC Temple of the Church of Later Day Saints. They resided in Pennsylvania where they were an active part of the Church of Jesus Christ of Later Day Saints attending the Carlisle Ward. Ben was a loving father of his two children with Michelle, Nicholas Maddox and Laura Jean. He had also enjoyed being a father to his stepson, Shawn Anthony Jones who predeceased him in 2015. Ben enjoyed teaching his children a variety of skills and watching them grow. His hobbies included woodworking, kayaking, graphic design and firearms. Ben was also a member of “Daddy’s With Angels” a group for fathers only bereavement group. He was known for his ability to talk to anyone. Ben was a continual source of love and support for his family. In addition to his wife, children and parents, he is survived by his siblings: Melody Joiner of Harmony, MD, David Joiner of Felton, DE, Juliet Fountain of Pittsville, MD and Elizabeth Melvin of Cairo, WV. Services will be held at Fellows, Helfenbein and Newnam Funeral Home located at 130 Speer Road, Chestertown, MD on Wednesday January 12, 2022 beginning with visitation at 12pm, followed by funeral services at 1pm. An intimate graveside service will be held for family and close friends at Wesley Chapel Cemetery in Rock Hall, MD where he will be interred near his son Shawn. In lieu of flowers contributions may be made to his children’s educational fund, c/o Donna Seward 232 Mergasner Dr, Chestertown, MD 21620.

Benjamin Gardner Fountain of Newville, PA was called home to his heavenly father on January 4, 2022. Ben was born on May 10, 1975 to Edward Gardner Fountain of Greensboro, MD and Donna Marie Seward (nee Melvin) of Chestertown, MD. He was raised... View Obituary & Service Information

The family of Mr. Benjamin Gardner Fountain created this Life Tributes page to make it easy to share your memories.

Benjamin Gardner Fountain of Newville, PA was called home to...

Send flowers to the Fountain family.