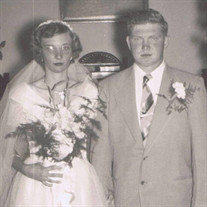 Barbara Ann Kelley Thompson of Chestertown, MD passed away on December 23, 2021. She was 88. She was born on January 3, 1933 at home in Skinners Neck, Rock Hall, MD, the daughter of the late Roland Russell and Dorothy Bullen Kelley. Barbara attended a one room schoolhouse in Skinners Neck, Rock Hall Elementary, and graduated from Rock Hall High School in 1952. She was a member of Raum Chapel Church and worked with the Sunday School. On July 26, 1952 she married the late Willard L. Thompson. They were married for 54 years; the two did virtually everything together. Barbara went to work for Washington College on March 1, 1954 and retired on March 15, 1995 with a total of 41 years at the College. She worked when bookkeeping, in 1954, was done by hand and bills were checked and coded for departmental charges. From there she went to the typewriter to type all the checks to be paid. She posted to a vouch register, subsidiary ledger, and from there to the general ledger. In 1958 the business office purchased the first accounting machine, next was NCR 395 accounting machine, equipped with a reader, a key punch was installed, and from there the college went to the colleague system. Barbara was a member of the First United Methodist Church in Chestertown where she helped in the Nursery. She served the Order of the Eastern Star Chapter #86 in Chestertown as Past Matron, Worthy Matron for four years, and held many offices where she was needed. She was Deputy Grand Lecturer for twenty years, Grand Representative to Oregon in 1983 and to Connecticut in 1992. She loved to cut the lawn and took pride in working with her flowers and trimming the shrubs. She loved her yard and felt close to God and Nature, her home was important to her. She lived her life by doing for others when she could. Mrs. Barbara would say, “do unto others as you would have others do unto you and love one another.” She stated that this was the Christian Way. Her husband, the late Willard L. Thompson predeceased her in 2006. She was also predeceased by her brothers, James Kelley, Sr., Irving Coleman and Lee Coleman. She is survived by her daughter Lisa Ann Thompson of Vermont, two sisters Elma (Dolly) Porter and her husband Davis of Pasadena, MD, Hope Zaharopoius of Massachusetts, and lots of nieces, nephews, and cousins. Services will be held on Wednesday, December 29 at 12:00 pm at Fellows, Helfenbein, and Newnam Funeral Home in Chestertown. A visitation will be held one hour prior from 11:00 am-12:00 pm at the funeral home.

Barbara Ann Kelley Thompson of Chestertown, MD passed away on December 23, 2021. She was 88. She was born on January 3, 1933 at home in Skinners Neck, Rock Hall, MD, the daughter of the late Roland Russell and Dorothy Bullen Kelley. Barbara... View Obituary & Service Information

The family of Barbara Ann Kelley Thompson created this Life Tributes page to make it easy to share your memories.

Barbara Ann Kelley Thompson of Chestertown, MD passed away on...

Send flowers to the Thompson family.