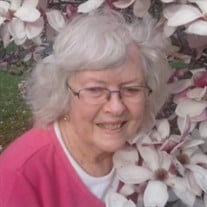 Barbara Lee Myers of Still Pond, MD died on September 22, 2021. She was 83. Mrs. Myers was born on July 14, 1938 in Rock Hall, MD, the daughter of the late William andVera Dickerson. The family moved to Baltimore when her father was offered a position as a Baltimore CityPolice Officer. She grew up in a home near Memorial Stadium and was a Colts fan. She went to Eastern High School, graduating with the class of 1956. She married Bud Harding and moved back to the Eastern Shore with her family. She married her second husband Richard Myers on Valentine's Day in 1986 (so Richard could remember their anniversary). They spent much of their time together on the water, where she truly loved to be. She would eat chicken and throw the bones off the boat, she was a true Eastern Shore girl. She loved to watch football with her Labradors and cheer on the Baltimore Ravens. Her grandchildren were her sunshine. She was preceded in death by both of her husbands, brother Jimmy Dickerson, and sister Anne Karczeski. She is survived by her daughters, Cindy King (Rick) of Worton and Donna Simmons (Andy) of Still Pond; stepsons Ricky Myers (Lee) of Worton and Brian Myers (Angie) of Worton; brother, Bill Dickerson (Jan) of Baltimore; sister-in-law Dot Dickerson of Baltimore; brother-in-law Len Karczeski of Baltimore; grandchildren Nathan, Danielle, Amanda, Caitlin, Meagan, Dylan, and Kyle; as well as great-grandchildren. Services will be held on Thursday, September 30, at 1:00 pm at St. James Church Cemetery, 10965 St. James Newtown Road in Worton, MD. A reception will follow at Fellows, Helfenbein, and Newnam Funeral Home in Chestertown, MD. In lieu of flowers, donations can be made to St. James Church, P.O. Box 156, Worton, MD 21678.

Barbara Lee Myers of Still Pond, MD died on September 22, 2021. She was 83. Mrs. Myers was born on July 14, 1938 in Rock Hall, MD, the daughter of the late William andVera Dickerson. The family moved to Baltimore when her father was offered... View Obituary & Service Information

The family of Barbara Lee Myers created this Life Tributes page to make it easy to share your memories.

Send flowers to the Myers family.