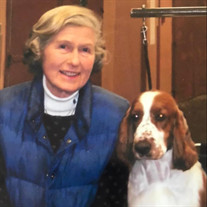 Anne Frezil Legare, 91, of Oxford, MD, passed away peacefully on Monday, December 20th, at her beloved home, "Holly House" in Oxford, MD, surrounded by her (3) daughters and Welsh Springer Spaniels with Christmas Carols playing. It was a beautiful... View Obituary & Service Information

The family of Anne Frezil Legare created this Life Tributes page to make it easy to share your memories.

Send flowers to the Legare family.