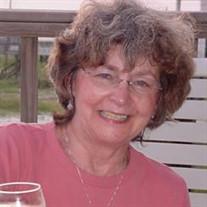 Ann Elizabeth Dudrow Terhes, age 86, of Chestertown, Maryland, passed away from complications of Alzheimer’s disease on Wednesday, November 24, 2021. She was born to the late John Moore and Elizabeth Lemen Moore in Bathe, Maine, on March 24, 1935, and later adopted by her stepfather, Daniel Dudrow. “Annie”, as she was known to friends and family, was an avid reader, loved cooking, gardening, and growing her own herbs. She received her Bachelor of Arts in Art Education in 1979 from Louisiana State University, and attended the Maryland Institute College of Art (MICA) for post-graduate studies. She worked as an artist and art teacher in East Baton Rouge Parish, Louisiana, and Prince George’s County, Maryland, and after retirement, she continued to serve as a substitute teacher for Archbishop Spalding High School in Anne Arundel County, Maryland. Annie loved working with children, encouraging them to express themselves through drawing, painting, and pottery. Painting was Annie’s passion and where her free spirit truly shone. Her favorite mediums were oil, water color, and mixed media, and she drew upon her travels, experiences, historic events, and Greek mythology to create her works. Annie was active with the Maryland Hall for the Creative Arts and Maryland Federation of Art. Her artwork was exhibited in various shows and venues throughout the Baltimore region, including: Mattawoman Creek Art Center in Marbury; Maryland Federation of Art in Annapolis; Angelfall Studios II in Baltimore, Cardinal Gallery at Maryland Hall for the Creative Arts in Annapolis; Artscape in Baltimore; Anne Arundel Community College in Arnold; St. Mary’s Community College in St. Mary’s City; Montgomery College in Rockville; Harford Community College in Bel Air; and Koffee Therapy in Baltimore. Her work was also exhibited in shows outside the Baltimore region, including: Susquehanna Art Society, Pennsylvania; McNeese State University, Lake Charles, Louisiana; Art Place, Inc. in Chicago, Illinois; New Dominion Bookstore in Charlottesville, Virginia; and, Louisiana State University in Baton Rouge, Louisiana. Much of Annie’s younger life was spent in Baton Rouge, Louisiana, where she married her first husband, George Sabatier Platt, Jr., and adopted two children, Steven and Georgia Ann (“Gigi”). She discovered a love for water and boating, sailing her sunfish “Jaws” on the lakes and waterways around southern Louisiana, and hobie-catting around Cat Island with her dear friend, the late Gwen Butler. After teaching in Baton Rouge for several years, in 1989 Annie moved to Maryland, where she continued her studies at MICA. While teaching in Prince George’s County, Annie met and married the love of her life, the late Warner “Paul” Terhes, with whom she shared several adventure-filled years of boating on the Mulatni with friends and family, while continuing to pursue her artistic aspirations. Annie treasured time with her children, and loved being “Gram” to her six grandchildren and seven great grandchildren. She kept paints, pastels, and paper ready for the grandchildren when they would visit her studio, and hugs from them never failed to bring a big smile to her face. Annie is survived by her first husband, George, her children, Steven Platt (Kalyar) and Georgia Ann Platt, her grandchildren, Jennifer Satterwhite (Tyson), Ashley Wesley, Kristen Wesley, Emily Platt, Molly Platt, and Akhayar Platt, her great grandchildren, Matilda (“Mati”) Brashears, Logan Brashears, Dominick Satterwhite, Tristen Satterwhite, Mercadies (“Sadie”) Grimm, Payton Wesley, and Hunter Wesley, her sisters Joan Thompson (Dale) and Jill Biggs, her brother Daniel Dudrow (Mimi), her goddaughter Eva Kennedy, and numerous cousins, nieces, nephews, and dear friends. She was predeceased by her loving husband, Paul Terhes, her brother, Peter Dudrow, her parents, Dan and Betty Dudrow, and close friends Richard Kalter, Gwen Butler, and Pete and Marilyn Bozick. A funeral mass will be held for Annie at St. Mary’s Catholic Church, 109 Duke of Gloucester Street, Annapolis, Maryland 21401, on December 6, 2021, at 4 pm. Burial in the Maryland Veterans’ Cemetery in Crownsville, Maryland will take place on December 9 at 10 am. A celebration of Annie’s life will be held in Louisiana at a later date. In lieu of flowers, donations may be made in Annie’s name to the Alzheimer’s Association, or the charity of your choice.

Ann Elizabeth Dudrow Terhes, age 86, of Chestertown, Maryland, passed away from complications of Alzheimer&#8217;s disease on Wednesday, November 24, 2021. She was born to the late John Moore and Elizabeth Lemen Moore in Bathe, Maine, on March... View Obituary & Service Information

The family of Ann Elizabeth Dudrow Terhes created this Life Tributes page to make it easy to share your memories.

Send flowers to the Terhes family.