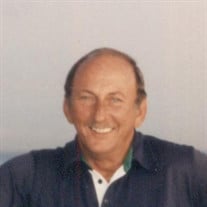 Alvin “Al” Lawing, Jr. of Easton, MD passed away August 11, 2021, at the age of 87. Al was a man’s man. He was a southern gentleman in the best sense of the word. He was an eagle scout and loved fishing, boating, nautical antiques and golf – especially golf. It is safe to say he never met a golf course he didn’t like, playing some of the finest courses throughout the United States, Ireland and Scotland. Al was a self-made man, putting himself through college clerking in a store, and working in the cafeteria at Wake Forest University where, among other things, he had the distinction of tutoring Arnold Palmer in math. He was a member of Sigma Chi fraternity and the Reserve Officers’ Training Corps and later served in the U.S. Army reserves for 7 years. Al’s understanding of numbers and his business degree at Wake Forest, took him into a career as an accountant leading to a position as VP for Finance at Hardee’s Food Systems in Rocky Mount, NC. When Hardee’s went public, he moved to Orlando where his many interests combined, joining Arnold Palmer’s golf club and eventually becoming President and CEO of Major Realty Corporation where he was known for signing major real estate development transactions on the golf course. He often told his grandson you can learn a lot about a man on the golf course. Al married Paulette in Orlando in 1989 and moved to Easton, MD in 1995 where they opened Easton Maritime Antiques. They retired in 2005 to enjoy more time with friends and family. Al was a long-time member of the American Legion, Post 91 in Cambridge, served on the Talbot County GOP Central Committee and Republican Leadership Council. He was a member of Christ Church in Easton. His favorite things were NC barbecue, Paulette’s mac and cheese, country ham biscuits, chocolate milk shakes, good wine, maritime antiques, a challenging sand shot, and good company. He loved entertaining his friends. Al was a loving and devoted husband, father, and grandfather. There was nothing he enjoyed more than traveling with his wife or playing golf with his daughter, Angie, and his grandson, Will. If you were his friend, you were his friend for life. Al was, in other words, a man who was the definition of a man. He loved deeply, worked hard, played hard, and walked humbly with his God. He was born in Maiden, NC in November of 1933 to Mary and Alvin Lawing and had one son, Alvin Lee Lawing, predeceased. He is survived by his wife Paulette, daughter, Angie Halamandaris, son-in-law Bill Halamandaris, grandson Will Halamandaris and former wife Ann Rascoe Lawing. A celebration of life ceremony will be held on Tuesday, September 28th at 11 am at Christ Church in Easton, MD. In lieu of flowers, memorial contributions can be made to the Christ Church Recovery Fund or Little Sisters of the Poor Washington, DC.

The family of Alvin Leon Lawing Jr. created this Life Tributes page to make it easy to share your memories.

Send flowers to the Lawing family.