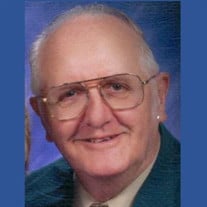 Albert Roland Lange of Stevensville, MD passed away on March 8, 2021 at Homestead Manor in Denton, MD. He was 91. Albert R. Lange was born in Baltimore, MD on September 5, 1929 to the late Leonard P. Lange and Pauline R. Wick Lange. After graduating from City College in Baltimore, MD in 1946, he enlisted in the U.S. Navy. During his military career he served on the U.S.S. Midway, U.S.S. Waller, U.S.S. Ramey, L.S.T. 6, U.S.S. Mullinix, and U.S.S. Francis Marion. He was stationed at the Naval Air Station in Chincoteague, VA, and in 1961 began recruiting duty in Baltimore, MD. In July of 1966 he honorably retired from the Navy with a ranking of E-6. Upon returning home to Baltimore, he began working for the Pennsylvania Railroad (later becoming Conrail) as a Tower Operator and Freight Agent. In 1992 he retired after 26 years. On October 13, 1951 Mr. Lange married Mary W. Bell of Baltimore, MD where they resided until 1967 when they moved to the Eastern Shore of Maryland, residing in Stevensville. Mr. Lange is a member of the Fleet Reserve Association, American Legion Post # 278, Centreville United Methodist Church, and the Bowling League in Easton. He enjoys bowling and gardening. In addition to his wife, Mary W. Bell Lange, he is survived by two sons, Brian K. Lange (Marie) and Craig S. Lange (Mary Anne); one half sister, Patricia A. Kelly; and five grandchildren, Tonia M. Rogers (Gene), Stacy M. Fuller (Adam Goloboski), Nicholas C. Lange (Amy), Rhyan C. Lange (Angela) and Holly N. De Stefano (Greg). One brother, Leonard P. Lange and one half brother, Harvey Sewell, predeceased him. A visitation will be held on Sunday, March 14, 2021 from 6-8 pm at the Fellows, Helfenbein & Newnam Funeral Home, P.A. in Centreville, MD, where a service will be held on Monday, March 15, 2021 at 11 am. Burial will follow in Chesterfield Cemetery in Centreville, MD. Memorial contributions can be made to American Legion Post #278, 800 Romancoke Stevensville MD 21666, or to Compass Regional Hospice, 160 Coursevall Dr., Centreville, MD 21617.

Albert Roland Lange of Stevensville, MD passed away on March 8, 2021 at Homestead Manor in Denton, MD. He was 91. Albert R. Lange was born in Baltimore, MD on September 5, 1929 to the late Leonard P. Lange and Pauline R. Wick Lange. After... View Obituary & Service Information

The family of Mr. Albert Roland Lange created this Life Tributes page to make it easy to share your memories.

Albert Roland Lange of Stevensville, MD passed away on March...

Send flowers to the Lange family.