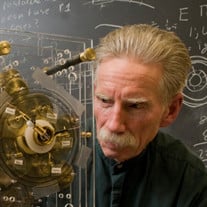 Oxford, Maryland: Alan Stewart Thorndike died in Easton, Maryland, on Monday, January 8, 2018. For three decades Alan suffered from Parkinson&#8217;s disease, which one could witness in the form of tremors but would never hear of in the form... View Obituary & Service Information

The family of Dr. Alan Stewart Thorndike created this Life Tributes page to make it easy to share your memories.

Send flowers to the Thorndike family.