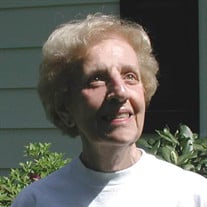 Ada Frances Keene, 90, of Easton, Maryland served up her last match Monday, March 29, 2021 with her best partner, her Lord, Jesus. He victoriously carried Fran through her toughest contest to a place of true joy, happiness, and peace. Fran was born in Baltimore on May 24, 1930 to the late Lillian Poole Ashby and Henry Franklin Ashby. She graduated from Catonsville High School and attended Strayer College. In her young professional career Fran would commute via streetcar into downtown Baltimore to work at the USF&G Insurance Company and then later as secretary to the General, U.S. Air Force. It was there where she met the love of her life, Harry Michael Keene, whom she married in 1955. He passed in October of 2012. Fran and Mike created their multi-generational homes in Baltimore at Kirkwood Road and Cedar Circle Drive, then in 1971 at Oaklands outside Easton. The breakfast and dinner table is where family, friends, and those in need were nourished and loved. Home was everything. Bayco, the family business, has thrived since its inception 44 years ago with Mike as salesman and Fran as bookkeeper. But, Fran’s true work came through years of Chairing meetings for Al-Anon. Her gentle and kind spirit radiated outward to others. She always had a smile, a comforting word, a touch on the arm, and often a gift, too. Fran, aka, Mommom, fiercely loved her grandchildren and their friends. Most were fooled by Fran’s warm spirit because at her core she was a fierce competitor. As a youth she pitched a mean softball, then went on to be a dominant player in the Baltimore Duckpin Bowling scene. (Fran still holds high game and set in Easton). At 41 she wrapped her hand around a tennis grip for the first time. She and her friends went on to win the USTA 4.0 National Tennis Championships in 1988 at Seabrook. It was in tennis that she blossomed with friendships and joy. Her family has tremendous gratitude for the true sustenance Fran received through the friendships forged through her tennis and church communities. Fran enjoyed volunteering at St. Mark’s, St. Vincent DePaul, and Hospice Festival of Trees. In addition to her husband and parents, Ada, as Fran was known by her family, was preceded in death by her sister Eva Franks and her brothers Robert and William Ashby. She is survived by her daughters Judy Greene (James) and Kim Kaestner (John), her son Michael (Carita); grandchildren Ashby Coen (Mike), Christie Kaestner, John Kaestner (fiancé Blaine), Jamie Blanchard (Michael), Eleanora Keene, and Olivia Keene; and great-grandchildren Thomas and Jane Blanchard. Visitation will be held Saturday, April 3rd from 3 to 6pm at Fellows, Helfenbein & Newnam Funeral Home, P.A., 200 S. Harrison St. in Easton. The service will be held at 1 PM on Monday, April 5, 2021 at Saints Peter and Paul Church, 1210 S. Washington Street, Easton, Maryland. A reception will follow at the Easton Family YMCA outside on Tennis Court 3. Burial will be private on another day. Memorial donations can be made to the Easton Family YMCA, St. Marks United Methodist Church or For All Seasons, Mental Health.

Ada Frances Keene, 90, of Easton, Maryland served up her last match Monday, March 29, 2021 with her best partner, her Lord, Jesus. He victoriously carried Fran through her toughest contest to a place of true joy, happiness, and peace. Fran... View Obituary & Service Information

The family of Ada Frances Keene created this Life Tributes page to make it easy to share your memories.

Ada Frances Keene, 90, of Easton, Maryland served up her last...

Send flowers to the Keene family.